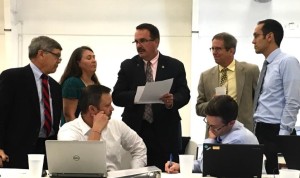 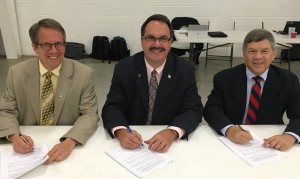 As I walked with the dogs this morning, two things were on my mind: the Jayhawks game tonight (playing Ohio State in the Final 4 match up) and my work. While basketball is the connotation most of us have when it comes to the phrase “March Madness”, I could not help to think it described my work this month, and for that matter, most of the last 15 months.

I have not written much about my work here and I plan to remedy that in the coming weeks and months. We will start with the basics here, esp. how I got to my current position of Chief Engineer.

[I also plan to write in the coming months on my reading on the topic of stress management.  While I think I deal with stress fairly well, earlier this year, the effect of the seemingly unremitting pace of 2011 and the first quarter of 2012 showed itself in new ways. Fortunately, I recognized it for what it was and headed to the library…].

My work, an introduction – I was trained as a civil engineer (KU 1977), worked in consulting for three years in Minnesota, and then spent 3 years in developing Africa as a water resource engineer.

In 1984, on our return to the U.S, I began working for the Kansas Division of Water Resources (DWR) where I have worked since. Having decided that water resources was the specialty of civil engineering where I intended to devote my career, I worked on my master’s degree in water resources engineering, one class per semester from 1984 to 1991. Over the next 23 years I worked up the ranks of DWR in various positions. For a fuller treatment of these years, see my public profile at Linkedin at: http://www.linkedin.com/in/davidwbarfield.

DWR’s major responsibilities include: administering the Kansas Water Appropriation Act (KWAA), the most significant of numerous Kansas water laws. The Act governs all water development and water use in Kansas. The Division also has significant responsibilities under numerous other statutes including exclusive state regulation over dams, levees, and other works in our streams and floodplains as well as administering Kansas interstate (water) compacts.

The Division is led by a position called the Chief Engineer (CE). The media regularly calls the position Kansas “water czar” due its significant regulatory responsibility of the state’s water resources.

How I came to be DWR’s chief engineer – I never really aspired to the position believing it above my capabilities.  When the position of Assistant Chief Engineer opened up in 2005, I did not apply for it because of this. I also never thought my career path within DWR was leading me there (I spent 15 years prior to 2007 out of the mainstream of the Division’s work, leading our technical team dealing with our interstate compact work). But I was wrong. My interstate work had me working regularly and closely with our chief engineer, David Pope. It had me regularly working through difficult, detailed, and very technical negotiations with our neighboring states and the federal government. It had me learning to work with the media and the public and to a limited extent the Legislature.

In 2007, when David Pope suddenly retired after 24 years as chief engineer, I was asked to be Acting Chief Engineer. I was shocked at the time, and agreed to be the Acting CE, but again, did not initially consider applying for the Chief Engineer position.  Over my 5 months as Acting CE, I was encouraged by many persons around me to apply for the job.  I thought long and hard about whether I could do the job well and whether I wanted a job with so much responsibility.

I found that I enjoyed the position, despite its demands.  I also believe it was more than just coincidence that David retired as our last daughter was graduating from high school. Further, during my tenure as acting CE, Cathy and I got some unique input in our lives (something called LEAD; we applied to go before David retired; more on this later) that helped me to see some of my key skills and abilities were well-suited to a position like a CE.

After praying about it, I ultimately decided to apply for the job and in November 2007 was made Kansas fifth Chief Engineer (since 1929; DWR has had 3 chief engineers that have served over 20 years each).

March madness – I have written more above than I intended so I will leave to later to describe the 15 months of madness I have been going through at work.  A lot of March’s work madness has been legislative in nature. This is my fifth legislative session as Chief Engineer and its significant in terms of water legislation is greater than the other four combined.

That is it for now. That other March Madness is calling. The first game is on now and KU plays in two hours. Rock Chalk Jayhalk, go KU.