I am just back from Sublette, Kansas (Haskell County, southwest Kansas) after being at the center of an intense 3-day trial over a water dispute. Shown with me are the 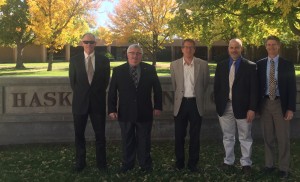 others with the Div. of Water Resource who testified with me.  It was intense, boring, encouraging, and frustrating at various times over the days.

The case is a pretty big deal with Kansas water law. The immediate issue in this small pocket of southwest Kansas (about two square miles) which is nearly out of water is a dispute over who gets to use the last of it: the irrigator who is “first in time”, as our law says, or whoever can pump it last. It is a big deal as over time, more and more areas are running out of water, so the winner here will determine what happens elsewhere.

I am glad to be home “de-compressing” (my term for the couple of days it takes me to unwind for intense work periods like this).

For those few of you who want to know more about this particular dispute, you can read the Kansas Court of Appeals decision on part 1 of the case: a temporary injunction against two of neighbors pumping based on DWR’s investigation. See http://www.kscourts.org/…/op…/ctapp/2015/20150403/111975.pdf.

The current trial segment is the larger fight over a permanent injunction on the pumping. Whoever wins this case in Haskell County District Court will likely appeal to the Court of Appeals and likely to the Kansas Supreme Court eventually.